Every year on the last Monday of May, the US pauses to remember those who gave their lives to defend our country. faith has a similar event commonly called Communion, but does it really cause us to remember Jesus’ sacrifice for us? 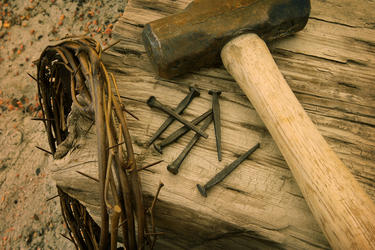 As the US approaches Memorial Day, we are reminded that this day to honor those who died in service to their country has come to be more commonly viewed as the marker of the beginning of summer, with Labor Day (to honor workers) marking the end. So also the traditional Christian celebration of “The Lord’s Supper” has become more of a rite or duty than a true memorial. Most see it as a super-spirital activity, and some churches deny participation to those who have not “joined” or become “members”, especially if they have not been water baptized, regardless of their spiritual condition or profession of faith. So just as Americans need to return to an emphasis on the true purpose of Memorial Day, so also Christians need to look at the full context of that last meal Jesus shared with his disciples.

The occasion of that meal was the Preparation Day for the Passover, and Jesus clearly labeled it a remembrance rather than a rite:1

As what tradition has come to call the Last Supper began that evening, Jesus was facing the full weight of what he had come to earth to accomplish. But what tradition has called “communion” or “eucharist” was, like “the Lord’s Prayer”, never meant to be a slavishly followed rite or ordinance. Jesus stated that it was simply a remembrance; he even left the frequency of its practice up to his disciples and gave no explicit instructions on how to conduct it. Blessing the bread and drink was a very common practice whereby the blessings of God and the fellowship of brothers and sisters was celebrated. Of course, Jesus gave new symbolic meaning to the bread and wine, but it was still a remembrance and not a ritual.

One very important thing Jesus wanted his disciples to remember was the purpose for his sacrifice, which he demonstrated by washing their feet. Another quote from the same source:

But his washing of the disciples’ feet was no less significant. This was the duty of the household servant, the lowliest domestic. But though he had told the disciples about what makes a leader in the coming kingdom, he now acted it out in a powerful object lesson: if the Master Himself could stoop to this level and take the most humble role in society, then anyone who would claim to follow him must do the same. This is why he told Peter that failing to allow this would mean he would not be a fit disciple. Obviously Peter was being the one served there, but to have his own Master serve him was a lesson that would cut through all social norms. Tragically, it seems that the majority of disciples of all following generations would turn this lesson upside down by erecting hierarchies of rank and power among brothers and sisters, causing division. Regardless of how piously and sincerely a Christian leader may rule, it is still rule rather than the kind of service Jesus modeled.

No leader or official was ever designated to administer a ritual or somehow spiritualize the memorial. So for the churches to think that only an ordained and authoritative “minister” can properly conduct this memorial, completely misses the point Jesus made. It is a lesson in humility, the very antithesis of hierarchy and authority. Jesus came to do much more than pay for sins; he came to turn religion on its head.

The “gospel” Jesus and John the Baptist spread before Jesus went to the cross was “the gospel of the kingdom of God”; that is, that the promised Messiah had come to Israel. He had come to fulfill the prophecies and meet the demands of the laws of Moses, such that whoever among the people of Israel accepted him would likewise fulfill them. There was no hint at this time about a coming new entity we call the “church” (more accurately, “congregation” or “assembly”); rather, the “ekklesia” he spoke of (with the lone exception of his statement to Peter in Mat. 16:18) was what the people of Israel understood that term to mean: them. Had they accepted him, the remaining prophecies to Israel would have been fulfilled and the Kingdom would have come— just as Jesus told his disciples to pray (see Mat. 6:10), and as they would still presume just before his ascension (Acts 1:6).2

But the “gospel” took on new meaning due to Israel’s rejection of their Messiah. Since then, it has been “the gospel of Jesus Christ”, of his death and resurrection.3 As further explained in the New Testament by both James and Paul, God had a surprise or “mystery” ready for after this rejection: the Gentiles would, along with any believing Jews, be formed into a new, third entity, “the congregation of God” (1 Cor. 10:32).

Now here is the significance of this new “congregation”: that whoever belongs to Jesus is not bound to religion and ritual, is not deemed an outsider or inferior for any reason (Gal. 3:28), is considered a child and heir rather than a mere servant (Rom. 8:17, Gal. 3:29, Eph. 3:6), and is indwelt by the Holy Spirit (2 Cor. 1:22, 5:5, Eph. 1:14). Jesus came to lift burdens and open prison doors (Luke 4:18-19), not make the burdens heavier and the doors thicker. But this is what many churches have become, while many others have gone to the opposite extreme and thrown all discipline and sound teaching away, forgetting that we are free from sin, not to sin (Rom. 6:1-2, 7:6).

So what exactly are we to remember about Jesus? That we are saved (reconciled to God) through faith in his resurrection alone (Rom. 5:10, Eph. 2:8), and that our response to this is gratitude, expressed in humble service to others. We should remember this every day on a personal level, but if we also choose to do so in groups via a shared meal, we must not let it become the opposite of what it was meant to be. It is not the literal drinking of wine or eating of bread that Jesus emphasized, not even the literal washing of other people’s feet. Rather, his whole point was that his death and resurrection must be remembered as the reason we humbly serve each other, no longer trying to either claim authority or hide behind it.

However or whenever you may choose to remember what Jesus came to do, don’t let it become another “holiday” that has lost its original meaning. Don’t perform rituals; don’t look down on believers who don’t perform rituals; don’t think of such practices as a “marker” of spiritual superiority or duty. Instead, remember and honor Jesus by the way you live, and don’t be ashamed to speak of him. Now more than ever, the lost need to see and hear the name of Jesus as something other than a curse word; they need to know why Jesus rising from the dead should matter to them. This is no time to be “politically correct” or to shrink back in fear of those who would mock or punish or even kill us for preaching the gospel of Jesus Christ. Time is very short, and if we care about them at all, we will fearlessly tell them how to escape the wrath of God that is about to be unleashed on the world.