Orwell warned of language and vocabulary being used to control and severely limit thought. Did we heed the warning? 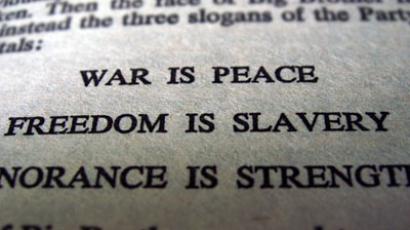 As you can read at this link, George Orwell’s novel 1984 explained how thought could be controlled by limiting people’s vocabulary to only state-approved words called "newspeak”. Any words or speech outside of those boundaries was called “thoughtcrime”. In this way, the state never feared rebellion even by the “proles”, the poor, ignorant masses who lived in relative freedom.

Today, rather than overtly calling it “newspeak”, we call it “hate speech”, and it is increasingly being punished as a crime (or, to use a term from the movie Minority Report, “pre-crime”). Can we dismiss this as coincidence and “fearmongering”, which really is “newspeak”? Can any logical argument be made to prove that there is any substantial difference between the terms (and purposes for) “hate speech” and “newspeak”?

Think about how often “racist” is used to silence speech and even shut down businesses, entertainers, and politicians. Think about the recent banning of all things deemed representative of slavery in America, particularly the Confederate flag, but extending to all monuments and public expressions. Think also about the recent US Supreme Court ruling on “Obamacare”, where dissenting judge Scalia wrote that “Words no longer have meaning if an Exchange that is not established by a State is ‘established by the State’”. It strains logic to claim that these examples do not fit the definition of “newspeak”.

The assault on speech that is truly free and meaningful is perhaps the most stealthy means by which public opinion is controlled, as Orwell clearly understood. We can add to the list the “text speak” revolution, which hyper-abbreviates words and even prefers to use emoji or “ideagrams”. And while the technology of Orwell’s day used newspapers, books, and “telescreens” to disseminate propaganda, today we have social networks, message boards, and a variety of other media catering to quick, shallow communication. The ease with which such technology is used to sway public opinion is well-documented (example).

We must understand that the purpose of government is to control the population to one degree or another. We expect it to curtail the freedom of those deemed criminals; we expect it to make laws that benefit the majority and not the minority; we expect it to protect our resources from those who elect to use them in ways the majority deems unacceptable. But this in turn leads to the question of whether government should be a democracy or a constitutional republic (see Here and Here). And if it is the latter, the people must acknowledge that it cannot function without a strong moral base, and that it requires all public governmental institutions to be comprised of people who will uphold the law rather than use it to ultimately enslave the citizenry.

The United States were originally to be a constitutional republic, but it has undeniably become a fascist oligarchy, a government run by powerful politicians and business leaders who wield dictatorial control over the country. They accomplish this through the educational indoctrination system, media, and law enforcement, as well as thought control through public shaming (forced apologies), intimidation, litigation, and imprisonment. When our country’s highest court can declare, in all seriousness, that “an Exchange that is not established by a State is ‘established by the State’”, thought control has moved from dystopian fiction to our present reality.

But how did this happen? The US Constitution tried its best to prevent it, but laws on paper only have as much meaning as the general population gives them. That is, when people cannot be bothered to pay attention to the slippery slope from seeming minor violations to open disdain, they will get the kind of government that fills the vacuum. The reason people elect others to manage government is because not everyone is qualified to do so, and most wouldn’t have the time. But if they do not at least keep such politicians on very short leashes, so to speak, the animals will run wild and turn on their owners. History has repeatedly shown that even the smallest excursion outside of the law of the land (e.g. to use public funds to help the needy) inevitably leads to greater and greater violations. Yet in spite of this repetition, people never seem to learn the lesson. And when government uses thought control over the entire population as it does today, people are actively prevented from knowing history enough to learn from it, which is yet another Orwellian principle (the “memory hole”).

Now that we recognize the prison we have constructed for ourselves through apathy and naïveté, what can we do? As pointed out in the animated film A Bug’s Life, we outnumber the oligarchy. But without our own army, we cannot overcome it, seeing that force is the only form of persuasion said oligarchy understands. Neither can we run or hide and hope to ride out the oppressive government, since it will always return as it has in the endless cycle of history. What is needed is to free minds, but here again, we would first have to stop the cradle-to-grave government educational indoctrination system and replace it with our own.